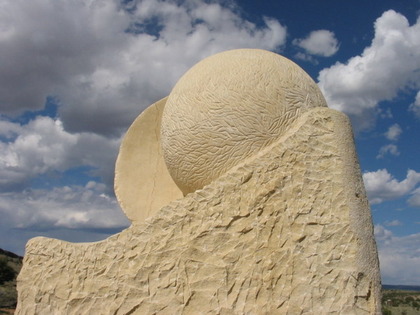 This is the second monument for the New Moon Overlook neighborhood, installed in May of 2007. At about the center of the distance across the site, there is a long, bow-shaped traffic island which divides the East-West roadway and the sculpture is sited at the center of this island.
The island is first approached from the west when entering the neighborhood and the east when leaving. The sculpture represents the setting full moon at the Spring equinox as viewed from the eastern approach and the rising full moon at the Autumn equinox from the western approach. The seasonal center-point and symmetry of the equinoxes relates to this monument's geographic location. Also, the “moons” are aligned on a solar North-South axis so that at solar noon the shadows from the moons’ edges align North-South. And on the Spring and Autumn equinoxes the sun will rise and set directly in line with the faces of the “moons”.
Although the coincidence of a full moon rising and setting on the equinox is rare, there will be the opportunity to witness this event with the sculpture in the foreground. The angle of moon-rise movement represented in the sculpture matches the angle of the celestial moon as it rises and sets on these dates. The other phases of the moon when it rises and sets on the equinoxes, as well as other full-moon rises and sets will still have a strong visual connection to this sculpture. So, once again, the earth-sky connection is manifest in a major landmark within the Galisteo Basin Preserve community