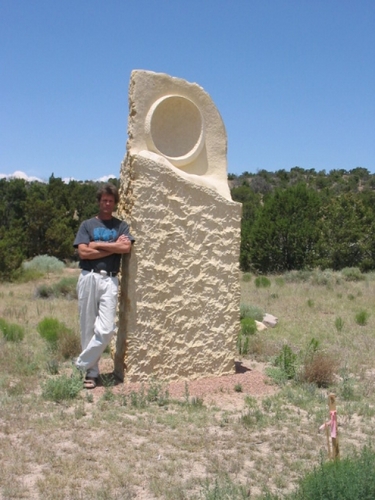 This sculpture is the first of what has been planned to be four separate monuments for a new neighborhood called the New Moon Overlook. The NMO is within the Galisteo Basin Preserve project which is near the villages of Lamy and Galisteo, NM. The client is Commonweal Conservancy, the same group which developed the West Basin Preserve. This first monument marks the entrance to the neighborhood at a road intersection within the larger development. It was installed in December of 2006.
The sculpture celebrates the early illumination of the crescent moon as it rests in an outstretched hand. The monument will first be seen from an easterly approach, so when the celestial moon is in it's first waxing stage, the actual crescent moon will be visible in the western sky behind this sculpture. In this part of northern New Mexico, the sky is usually so clear that when the moon is new (in the crescent phase) you can also see the rest of the moon’s surface subtly illuminated by “earthshine”, or sunlight reflected off the Earth and out to the Moon. This is a true Earth-Sky connection.
The design concept speaks to the larger project’s intention of balance between human contact with the land through building and the need for sensitivity and respect for this land. The left hand holding the moon reflects the right-brain, feminine aspect of human contact with the equally archetypal feminine aspect of the moon. The hand that builds on the land is strong, but gentle, intelligent and respectful. The connection between the hand and moon speaks to the earth-sky connection and realization of our humble place within a much, much larger context.
Every day from sunrise to solar noon, the sun will track across the bowl from a slightly different angle above the horizon. At dawn, viewed from the roadway approach, the sunlight will at first fill the bowl and then begin to move to the right, followed by a shadow which will appear to reflect the phases of the moon. Just before solar noon time, a thin crescent of sunlight will remain at the right-hand edge of the bowl. This will look very much like the waxing, crescent moon.
The idea is that people living in and visiting the neighborhood will, over time, see the sculpture “moon” in different phases, depending on what time of day they approach the monument. Then one beautiful evening they’ll notice the celestial crescent moon behind the sculpture and make the connection for themselves. This gradual, unfolding understanding reflects the nature of the larger project, the Galisteo Basin Preserve, which is all about positive human relationship to and learning from the land. 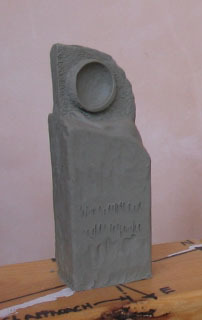 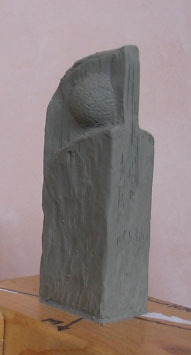