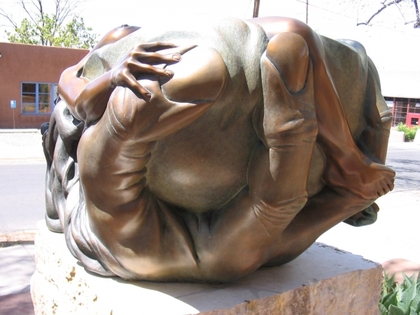 This piece is a continuation of the ideas in "Gaia meets Coriolis" (see "background"text) The large hand belongs to Gaia herself and she is holding the egg/Earth. Emerging from the egg is her daughter, embodying the full potential and power of the continuum of woman-mother-creator.

The Daughter's body and Gaia's hand are at very different scales (about 1:8) but they fold into each other the way two hands can interlace. This represents the way the inner and outer universes fit together. For example, the convex curve of the daughter's forearm is nestled into the concave curve of the first section of her mother's thumb. I see the inner and outer universes fitting together in a continuum of form and space from molecules and DNA to the egg within the mother who is within the Earth, within the solar system, within the galaxy and then the universe. Then there is the question of layers or dimensions beyond that. The time-continuum of interconnected lives is also manifest in this sculpture.

As in "Gaia meets Coriolis" the sphere (in this piece it is a hemisphere) is Earth, the egg and the cell. It is solid enough to support the emerging life and also flexible enough to morph to the pressures exerted by both Mother and Daughter.

The Daughter's hair moves like both water and fire: it can defy gravity. It is the charge that comes from the circuit between Mother and Daughter, past present and future.