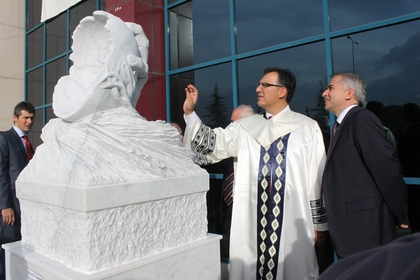 During the summer of 2010, I was invited to participate in an art symposium at Pamukkale University in Denizli, Turkey. This was an incredibly positive and life-changing experience for me and is another story in itself.

This sculpture is titled "Eros" and the intention is to reflect this classical idea of life and love. The hand, which is three times life-size and modeled on my own, holds an open egg shell which represents the earth and the source of life. (You may see an embryo-like form in the veining of the marble, inside the egg.) The hand and the egg arise from a spiraling, uprising network of light and shadow forms which represent the rotating, cyclical quality of the universe and human life.

In the northern hemisphere, with the back of the hand oriented North and the open side of the egg South, the sculpture appears to track the course of the sun as it moves from East to West.

Embracing Eros, an experience which can be simultaneously nourishing and terrifying, is what Epicurus was referring to when he spoke about a life well-lived.