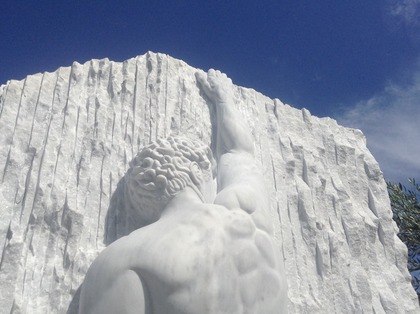 I carved this sculpture from a twelve-ton block of marble at the Greek Marble Initiative symposium in Sourotis, Thessaloniki, Greece during the summer of 2015. This is a larger than life-size sculpture measuring 9'-10"x 5'-0"x2'-7".

The idea for this piece derived from a much smaller sculpture I carved in 2003, titled "By My Fingernails". The subject of the earlier piece reflected life as a working artist as well as a situation which anyone who's ever taken great risks will relate to. I submitted the design for the larger sculpture to the Greek Marble Initiative in 2013 and it was accepted, but at that time there was not a large enough carving block available. When I arrived at the 2015 symposium, to my surprise and delight, Stavros Muronidis presented me with a block almost exactly the same dimensions as I'd requested in 2013. So, after a 12-year wait, I was able to begin this project with the working title, "By My Fingernails II".

As I began the project in June, 2015, the events of the Greece-European Union economic crisis were unfolding daily. From where I was, what I read and through many conversations with Greek friends and others I met, from average people to intellectuals, I came to understand this crisis from the Greek perspective both in terms of current affairs and ancient history. What I was left with was a profound respect for the people of Greece in addition to an educated and intuitive sense that the country would ultimately prevail.

The figure of the man represents the people of Greece. He's in an obviously difficult and dangerous situation, hanging off the edge of a cliff by the fingers of one hand. But he's also obviosly very strong and there is no doubt that he has the strength and experience to not only manage the climb successfully but also continue to thrive at the top. So this sculpture is a reflection on an extremely challenging event in Greek history as well as an optimistic statement that Greece will prevail and ultimately succeed.