see all galleries
Work in Progress prev all next 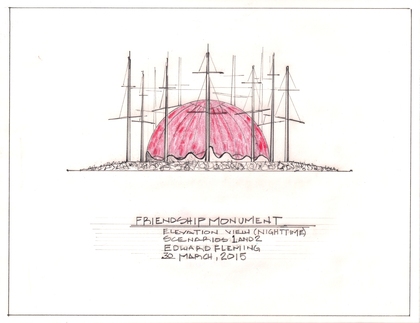 This project commemorates the Battle of Cesme, fought between the Ottoman and
Russian navies in 1770. It also commemorates the friendship between contemporary
Turkey and Russia. My design intention is to create a dynamic representation of the story
of the Battle and the people and nations (historic and contemporary) involved, as well as
the dramatic, kinetic imagery of the chaos of maritime warfare. Finally, and most
importantly, my intention is to invite viewers to think about the circular nature of
conflict, from a personal, to national to global level. I believe it is with this awareness
that, between people and nations, there can be deep and lasting friendship and as a result
of that friendship, peace and prosperity.

The general composition is a large sphere, 32 meters in diameter, representing both the
planet Earth, the sea and the sky, ringed by 16 tall, square-rigger ship masts. There are a
series of concentric walkways that circle the monument: two near the sphere (one at
about the equator and a second below) and a third outside and below the ring of masts. This
composition would be set in a large open area and approached by viewers from a distance.

The masts represent the ships of the Ottoman and Russian navies. The rigging on the
different masts is inter-connected, which symbolizes the friendship and interdependence
between the countries of Turkey and Russia. The masts will literally be supported by
each other and in a circle, thereby presenting the strongest possible structure. Carved into
the masts will be many images of cooperation and friendship between the two nations.
The flags of the two nations, the town of Cesme and other related places in both Turkey
and Russia could be flown from the masts.

In daylight, the sphere appears to be cut in half along the equator, so that primarily the
lower hemisphere is seen. At about the equator level, there are large ocean waves that
appear to move across the horizontal surface of the hemisphere, The ocean waves will be
at adult eye-level when viewed from the Upper Walkway, which is located about a meter
away from the sphere. As viewers walk around the equator, the waves will appear to
move due- to the parallax effect between the- foreground and background waves. The-
motion of the viewers will make the waves appear to move. This is illustrated in the short
video that is part of this Preliminary Design presentation.

The lower hemisphere of the sculpture is partially below ground level and can also- be
viewed from the Lower Walkway, accessible by both stairs and elevators. At this lower
level, along the surface of the sphere will be a number of bronze bas-relief sculptures,
and along the surface of the surrounding wall will he many other bas-relief sculptures
carved in stone. These sculptures will tell the history of the two countries, the Battle of
Cesme and also the contemporary story of the friendship between Turkey and Russia,
The stone sculptures set in the surrounding walls will represent the deep, underlying
history of Turkey and Russia and the bronze bas-reliefs on the surface of the hemisphere
will represent the contemporary history; up to the present.

At night, a system of water, mist and lighting will create the night time upper-
hemisphere. There will be a structure of curved water tubes, resembling latitude lines,
creating the general outline of the upper hemisphere. AU but four of the tubes will stop in
the air some distance from the surface of the lower hemisphere to allow unimpeded views
across the waves. At the very top.e£ ,the upper hemisphere structure will be an area
resembling the polar ice-cap that will contain equipment for water and lighting. This
structure will be suspended above the lower hemisphere by a system of cables connected
to the circle of masts, The tubes will contain pressurized water and will project mist from
their sides and ends. This, combined with jets of water-mist at the edge of the lower
hemisphere and embedded in the surface of the waves, will create a surface which will be
illuminated. There will also be a single water-jet at the center of the lower hemisphere
wave surface that will send a column of water straight up to the underside of the polar
cap. The water jet will cascade off the curved polar cap and create a hemispherical water-
spray surface. This will be another level of the upper hemisphere shape and will create a
sensation of movement of colors, Finally there will be a number of lights camouflaged
and mounted inside the waves which will provide additional visual effects inside the
upper hemisphere.

The water and mist will be illuminated by a sophisticated lighting system, part of it
mounted on the surrounding masts, that will among other possible effects, create- the-
imagery of fire reflected in the sky. From different vantage points: the approach to the
sculpture, the open areas surrounding it and the outer, Middle Walkway, the masts will be
in sharp silhouette against the fire-sky. And, just like the apparent movement of the
waves, as seen from the Upper Walkway, when people walk around the entire monument,
the masts will appear to. move across the sky and on the waves, completing the imagery
of the sea battle.

The falling water will run down the sides of the lower hemisphere, into. drains at the
Lower Walkway level and be circulated, through filters and pumps, back to the upper
hemisphere fountain mechanism. The lighting will be cast onto the water by projectors
mounted around the sphere on the masts. A computer control booth for the lighting and
water system will be located within the lower structure of the monument. Many different
lighting effects can be projected onto the water. So- with this, the upper hemisphere o-f the
sculpture can be seen as both the completion of the sphere of the Earth as well as the sky-
dome.

The transition from day to night will be dramatic. During the daylight hours. the
monument will appear as masts of ships sailing around a large sea. As the sun sets and
the natural light fades, the water-mist will begin and the entire sphere will emerge. Then,
as the night's darkness deepens, the lights will project onto the mist and falling water and
colors will move across the "sky". The sound of the water falling will be another element
that will add to the whole composition and experience.

There is strong symbolism in the sphere being in two halves - the upper half is the
future, the modern world, the hi-tech surprises and the capability of our technical
evolution to change the appearance of the world. The minimal structure of this part of the
piece above the equator reflects the infinite possibilities of the future until it gets
consolidated in the present and converted into the unchangeable past; the lower parts are
the tradition, the stone, the past; the things that can never change because they already
happened or are beyond the control of man, and which shape and contain the possibilities-
for the future. Watching in the background is the immortal I immutable air, water and
earth, patiently observing this tiny moment in the pageant play itself out on a timescale as
old as the earth ... which is of course referenced in the complete sphere when the two
halves are considered together. *

It is my expectation that this design will draw many people from all walks of life and
nations to visit the Friendship Monument and Cesme. So I have also designed for large
numbers of public access which includes parking for buses; connection to town
transportation systems; information signs and monitors; public bathrooms; large open
areas fur people to gather, enjoy meals- together and wander around and through the
monument. The number of people drawn to this monument could produce a revenue
stream for the project and it's maintenance.

For project planning purposes, one important point to remember is that this design is
highly flexible. You will see that what I am presenting here is a very substantial project,
one that I believe reflects the magnitude of the subject. However, if due to limited
available space; cost, time or for other reasons, the design can be reduced in scale to meet
any reasonable budget/cost and land area. I am presenting two other design scenarios (#'s
2 and 3) and related cost estimates which illustrate this point.

There are many more detailed aspects to this design, including materials; which I would
be glad to discuss. I am also available to answer any questions that may arise. And I
would like to say here that I am honored to have been invited to make a presentation for
this project. I hope this design presents a spirit and imagery that can be further developed,
and one day become the Friendship Monument for the town of Cesme.