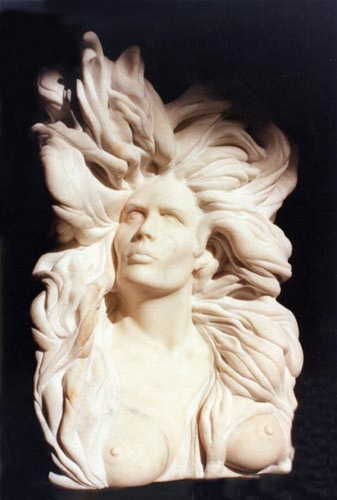 The underlying idea for this piece is the age-old dance between Eros and Thanatos. I wanted to create a very powerful woman who personified my image of the Diva. She is strong in all manners of thinking and action to the point where she has embodied both yin and yang, masculine and feminine energy. This does not make her an hermaphrodite, but rather, to my way of thinking, a complete woman.
Her up-lifted chin and sure gaze up and out is in a complex embrace with the skull of the same figure (i.e., herself) behind. She is turning her head to the right and that motion sweeps her hair in two different directions about the vertical center of her face. The orbital cavities of the skull behind her are on the same axis as her eyes so that as she looks up and over her right shoulder the skull looks down and over her left shoulder. Her hair weaves the two faces together. As you circumambulate the piece for the first time, the skull may come as a complete surprise since its deep recesses are similar in light and shadow to the deep furrows in the hair. She is looking to the future and the skull is looking towards the past or it could be the other way around, depending on your philosophical point of view.
In my opinion, the very essence of Woman is infinity. Think about it: she is part of an infinitely long span of birth, giving birth and death. She is born with the ability to connect with infinite re-creation and that comes from an infinitely deep source ("big-bang" theory or not).
Throughout human civilization the form of the skull has often been stylized to symbolize death and fear, yet literally behind every face, there is this structure of bone. For me, the skull itself is an exquisite piece of sculpture. (Actually I think every bone in the human body, with the possible exception of the calcaneus [heel-bone], is beautiful.) So in this sculpture, there is also a quick pulse between what is usually considered vital and beautiful and what has often been considered terrifying and dead. What's in-between is like asking the question of where you are when you pare down the edge between past and present. How far can you go, how thin can you carve this edge? If you take it to the limit (assuming, for just a moment, that there is one) what do you have when the past and future meet inside a split-second? I see that place inside the stone between the two faces and I believe it is evident (at least sub-consciously) when you walk around the piece. The concept is to display this sculpture with the woman's eyes a little above average eye-height which will put most people's eyes on the same face-to-skull axis.
I am completely fascinated by the whole science, metaphysics, form and movement of DNA. Hair has a similar form. In this sculpture the woman's hair links her face and skull, future and past and is the electrical current and messenger between them. The way it moves and twists upon itself is also like the form taken by DNA. The hair describes energetic motion as well as the wonder and mystery of the life-connections along the continuum of time.
This sculpture questions some of the contemporary and historical ideas of beauty, life and time and is talking about the connections and realities in human life that are present yet often invisible.