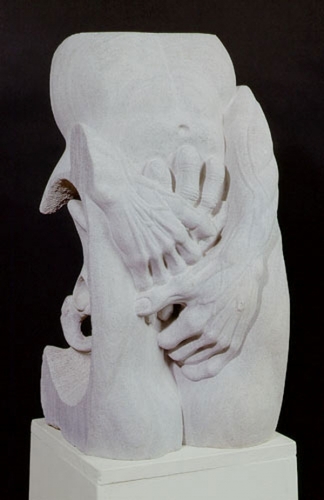 This piece talks about the connection between our physical inner and outer worlds as well as the life force of Eros and birth.

The work began as a study of three, overlaid hands, part of a much larger sculpture called "Rapture". As the piece progressed I became interested in the composition beyond the hands and started thinking about creating a torso. But the block of stone I was working with was not quite wide enough to accomodate the complete width of the hips. This opened up the question of what lay beneath and shifted my focus to the bone structure supporting the body. And so the pelvic bones became an integral part of the composition of this sculpture. I became completely enchanted with the form or, if you will, the architecture of the pelvis and spent a great deal of time carving this down to the smallest elements of the sacrum and coccyx. This last element reminds me of a sea turtle. The sweep and grace of the illium and iliac (hip bones) reminded me of high-Gothic architecture and also some of Eero Saarinen's work, particularly his TWA terminal in New York and Dulles Airport near Washington, DC. The further I got into studying and carving the pelvis, the more I realized how incredibly beautiful it is as well as unknown and unappreciated by most people. The word "pelvis" comes from a Latin word that essentially means, "bone that can not be described" because it is so complex and difficult to visualize or draw. But it is inside all of us and like the rest of the human structure, is something of awesome beauty.

In many Eastern meditation, healing and martial-arts traditions such as ChiGong, the Life-Force, or Chi, is considered to be held within the chalice which is the pelvis. Most of us entered the world through its portal and even if we didn't we all spent a considerable amount of sublime time within it.