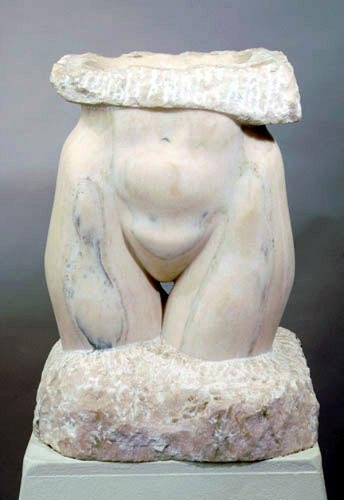 In 1995 I was living and working in Pietrasanta, Italy. I'd returned there with my family to stay for as long as possible in this stone sculptor's Mecca. We'd made arangements with a local family to trade my building renovation work for housing and studio space and lived there, two blocks from the central piazza, from the spring through the autumn; my son was three years old and my daughter celebrated her first birthday in Rome on our way back to America.

Even with the best of intentions and the highest appreciation for the Tuscan way of life, it takes some time to acclimate to the culture and, if possible, become accepted by the community. My teacher, mentor and friend, Pasquale Martini, whom I'd met while studying there in 1993 (and could be Marcello Mastrioni's brother), used to tell me, with a sparkle in his eye, that it was essential to breath in the Italian air to fully appreciate the whole culture, especially the beauty of the Italian women. This became a sort of mantra for settling into and embracing that wonderful and visceral culture: "Ahh, inspira l'aria d'Italia!"

For about half the work-week I would fix neglected, ancient buildings for our host, Paula Raffo, and during the other half I'd work in the studio of the marble-carving school she and Pasquale founded on Vialle l'Apua (where, from the right angle, you could see the Apuan Alps with their white marble-capped peaks hovering above the town). I also helped Pasquale teach by translating his Italian and pantomiming other languages. Most of the time I was able to concentrate on my own sculpture.

During one period I was in-between sculptures but had come across a really lovely piece of pink Portuguese marble, known locally as "Rossa Portugallo". I'd been struggling with ideas for the piece when early one morning I was walking up a steep street towards the Piazza into the rising sun. The usual crowd of pedestrians was moving down the street to open their shops and go to work and school, but somewhere in the middle I noticed a young woman strolling in my direction beside her bicycle. Her body was in silhouette against the sun; her blonde hair a penumbra and at the top of and in-between her tightly-clad legs there was a flash of sunlight through the proverbial "Picasso space". In that instant I knew, simultaneously, why this space was so-named and also that I was witnessing the essence of Italian femininity. I realized that from this American's perspective, most of the Italian women, of all ages, carry themselves with extraordinary confidence, serenity, style and sensuality. They are completely comfortable in their sexuality and revel in their femininity. The air surrounding them is charged with erotic energy. I wanted then to create a sculpture in celebration of Italian women and their life force. I never again saw the woman who so inspired me, but I've also never forgotten that moment.

I made a few conceptual drawings and spent a lot of time studying the relevant anatomy and classical sculpture at the local art museum and library. I also spent a lot of time at the beach at Marina di Pietrasanta researching the form and delighting in my job requirements.

The stone I'd found was a large, fairly rectangular block that bore several marks which I decided to keep: drill lines from the quarry near Estremoz in central Portugal and parts of large black lettering indicating the destination of the port of Cararra, Italy. My stone had been cut in Cararra or Pietrasanta from the much larager, ten to twelve ton block which had been shipped directly from the quarry in Portugal to Italy. So the first contact the stone had known from human hands, the drills that cut it from the mountain as well as the written directions for its first voyage in many millions of years, were already a part of of the sculpture I intended to honor a central part of the culture I was breathing every day.

As I worked into the stone to remove the part that surrounded the form, I used many of the same tools that stone sculptors have used since, at least, the Renaissance: the 'point' or 'subbia' (this one used since classical Greece); the 'rhondell' or 'unghietto' ('fingernail' in English since the end of the chisel looks a lot like one) and a toothed chisel or 'denti'. These tools are used in a progression from rough, more general to gradually more defined and detailed shaping and they all leave their own signatures. I smoothed the skin of the figure with steel files (made by hand in a small village nearby), diamond grinding pads and sandpaper, but left the different tool-signatures in the surrounding areas to mark the continuing progression from the quarry to the finished sculpture.

Making the passage through the stone to create the Picasso space was an exercise in alignment, patience and faith, but the light now passes through the stone in the same way I saw it that morning near the Piazza.

The green and black veining in the stone works almost like topographic lines on a map, emphasizing movement across the form and the large crystals in the marble sparkle in the light in a way that reminds me of the woman's hair, radiant in the sunlight.

Finally, at the top of the piece I carved an oblong bowl, inside of which is a bas-releif of an embryo, representing the continuum of l'aria d'Italia.