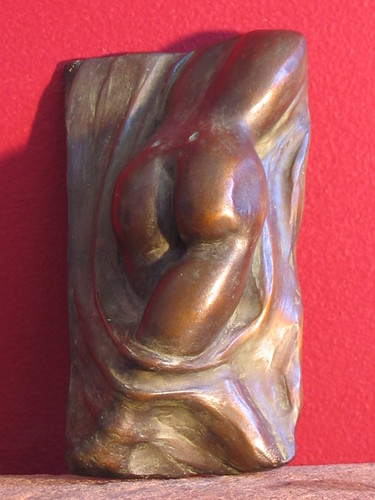 This is the first sculpture in a series of eight pieces, four of which I have carved in marble and four which are currently in maquette form and cast in bronze. In the first sculpture the subject is in very deep sleep, completely unconscious, in a dream state.

The "Dream" series is an intimate consideration of the shift in energy from deep sleep to gradual awakening and arousal. It is talking about the differences as well as the similarities between dreaming and wakefulness and the balance between the realities of thought and action. This work is also about the immense energy of passion.

The eight pieces in this series are each individual sculptures but they also work together as one composition. As a group, they become a study in motion, like stop-action photography. When all the pieces are aligned in series, the torso appears to move. When one not only scans from one direction to another, but also walks around the group, while scanning and changing the elevation of view, the perceived movement of the torsos becomes far more complex.

The focus of this series is the body's center, the chalice, the source of physical power and sexuality. This is why there is no face to detract attention from this nexus.