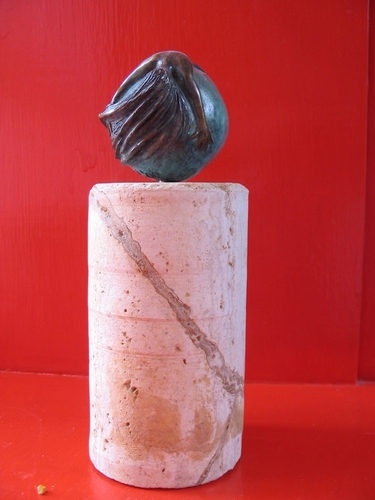 This sculpture is about Woman as the personification of infinity. It amazes me that a woman is born with the ability to give birth to another female with the same ability, having been born herself from her mother, a woman with the same ability. This idea reaches into mythology and my personal, various interpretations of meanings of form.

The Greek myth of Gaia and Uranus is an early story of Woman-as-Earth-as- Mother. I see the form, as well as the function of Earth as an egg, then mother, then egg, in the same temporal movement described above. This is an infinitely long reach both forward and backwards in time. I think of time as circular, rotating and spiraling like many of the physical aspects of the Universe as well as the form of DNA. The rotation of the Earth is both literally and metaphorically the passage of time. In this piece, the female figure is embracing and also within the sphere which is slightly deformed by the weight of her body. Here the figure is Gaia and the sphere is Earth. They are one and the same, representing the convergence of different life-spans over time.

I see the sphere or circle as the most fundamental form in nature which can be seen in the shapes of planets, their orbits, microscopic and sub-atomic particles, the movements of day-to-night-to-day, the seasons and other cycles including weather. Some of the elements of the human body are obviously circular: eyes, head, tips of toes and so forth. Other forms need to be seen from different perspectives to understand their roundness more clearly. In cross-section, virtually any element of the body is circular or round. At magnified, microscopic, and molecular levels the pores, blood cells, DNA, molecules, electrons and protons have similar shapes as well as behaviors that are circular or spherical. The forms and movement of many of the "interior" human elements are similar or the same as the planet Earth and other "exterior" elements within our solar system and the Universe. DNA, which for me goes to the very core of this idea of Gaia, is twisting and spiraling. The elements that form the "ladder" of DNA can be seen individually as straight, but the form and motion they create by their combination and composition is round. The work that DNA does, its messages and directions, is also circular, like the rotation of the Earth..

The Coriolis effect describes what happens to an object in motion relative to the movement of the Earth. Around 1835, a French engineer named Gustave-Gaspard Coriolis discovered that a cannon ball fired over a long trajectory would not land where it was supposed to but considerably to the right if it was fired from North to South. This was because as the cannon ball traveled in a straight line, the Earth was continuing to rotate, so that when the ball came to its target (on a stationary map), that point was no longer there. It appeared that the ball had moved off course when, in fact, it was the surface of the Earth that had actually moved. At the equator the Earth's surface travels at about 1,000 miles per hour. Things slow down as you get closer to the poles. If you were to stand at the exact North Pole it would take you 24 hours to complete the 360-degree turn of one complete Earth rotation. So the effect of the Earth's rotation is in constant change relative to any North-South motion. East-West motion is deflected towards the North or South poles. This torquing force affects many things on the planet including geology and weather. To look at a globe that shows the direction of the major ocean currents is an easy way to understand this phenomenon.

In this sculpture, the torquing motion of Gaia's hair on the Earth represents the form of this rotational energy of the Earth. She is both embracing and penetrating the sphere, holding on and having the ride of her life.