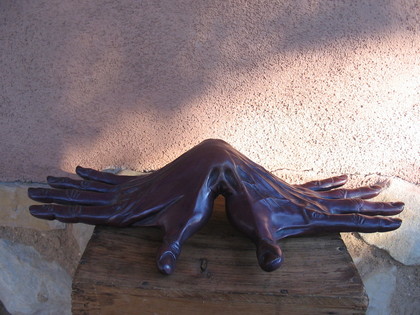 In 2002, while working in the studio of Giancarlo Buratti in Pietrasanta, Italy, I made a number of clay studies of hands as candelabras. This piece is cast from one of those studies and is intended to be suspended above a dining table. This will create both atmospheric lighting and an interplay between the solid form of the hands and the hands' shadows cast by the candlelight. The sculpture is supported by aircraft cable, which is very strong and also very thin, so it almost disappears. The candle holders are each hand-wrought from copper and are firmly attached to the fingers but they and the candles appear to balance on top of the fingers. After the candles are lit, heat from the flames causes air to to move around the sculpture which causes it to move in mysterious ways. The lighted sculpture creates its own micro-climate and weather patterns. And sometimes the candles burn at different rates which causes a slight imbalance to the sculpture which adds further complexities to its motion.